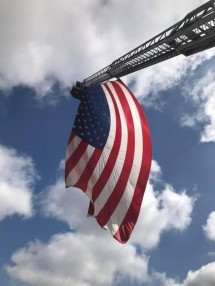 Join us as we salute our Veterans at the SD State Fair!

Aaron Van Beek serves as the Board President and Flight Director for Midwest Honor Flight.  He has taught third grade at Kinsey Elementary in Sioux Center, Iowa for the past 4 years.  In July, he will transition to full time CEO of Midwest Honor Flight.  Aaron also serves as the volunteer Director for South Dakota Veterans Cemetery Wreaths Across America and Sioux Center Wreaths Across America, and is a member of the Sons of the American Legion Squadron 199 of Sioux Center and of the VFW Auxiliary Unit 628 of Sioux Falls.  Although not having served in the military himself, his passion for Veterans comes from three of his great-grandfathers (WWII), one grandfather (Vietnam), and one sister (current), all who served honorably in the US Army and the US Army Air Corp.

Aaron saw a need in Northwest Iowa, South Dakota, and Southwest Minnesota - Veterans were not having the time or the funds to see their memorials in Washington, D.C.  In 2017, he started the Midwest Honor Flight through the Honor Flight Network.  This was the first Honor Flight in the region to fly Korean and Vietnam Veterans, in addition to WWII Veterans, to DC under the care and supervision of Honor Flight Guardians.  "They answered the call to serve our country and those around the globe.  It's now our duty as a grateful nation to get them out to Washington, D.C. to see the memorials dedicated to their service and fellow comrades.  It truly is the least we can do as the American people for our brave American heroes to visit their memorials dedicated to their service and sacrifice in our nation’s capital - Washington, D.C!”