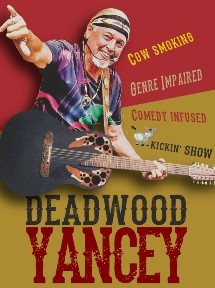 A New Orleans, Louisiana native and 2nd of 11 boys, Yancey picked up his first guitar when only knee high to a crawfish. Growing recognition and talent show successes spurred him. At age 18, he was a night club fixture on Bourbon Street, headlining for Andy’s, the French Quarter’s gathering place for the world’s hottest musicians. Here, Yancey caught the eye of Beaver Promotions and took the act on the road. Combining passion for music and dreams of being a cowboy, he punched cattle by day and crooned by night in the mountains of Idaho and Montana.

While opening for the Allman Brothers, ZZ Top, and Santana, and performing briefly with Joni Mitchell and Jackson Browne, a blend of heartfelt country and unique styling began to emerge. Yancey started opening shows for such country giants as Tanya Tucker, Johnny Paycheck, The Flying Burrito Brothers, and Steve Goodman. He has performed at Carnegie Hall and as a solo act at fairs, rallies, major resorts, and country clubs across the United States, Canada, Hawaii, and Virgin Islands. National TV experiences include TNN, The Jim Ed Brown Show and commercial spots. While in Nashville, Yancey performed at Tootsies on Broadway for 6 months. Tootsies is one of the most famous country music bars in history. Hank Williams, Willie Nelson, Waylon Jennings, & Kris Kristofferson (along with other country stars) hung out between shows at the Grand Old Opry because Tootsies was right out back. As prolific a songwriter as he is a riveting personality and talented vocalist, Yancey has written with Nashville greats like Bud “Friends in Low Places” Lee.

In 2004 Yancey had the opportunity to tour Australia and New Zealand with stops in Hawaii and South Korea. Within the next few years, Yancey did a radio tour or Norway, Sweden, and Denmark where his original music is being played today.

In 1984, while living in Nashville, he auditioned for a national fair buyer’s convention in Wisconsin where he met a musician from Deadwood South Dakota who loved his music. Yancey was told of the opportunities and history of the wildest, westest, killinest, gamblinist town in the world.

Immediately interested he called the Buffalo Saloon and was told they only hire after a live audition. Yancey went to Deadwood from Nashville and was hired on the spot for the summer. His love of the Black Hills is reflected in his songs including, “Deadwood Hole,” East River Queen,” Black Hills Train,” “Dirt Red Road,” and “Cheyenne Stage,” which is played at the Mining Museum in Lead, South Dakota and is part of a the soundtrack for the Cheyenne to Deadwood Stage Documentary.

Yancey’s 35-year show at the Buffalo is the longest running show in the history of the Black Hills and state of South Dakota. He could be heard all over Deadwood since the Buffalo is an outside venue and became known as “The Voice of Deadwood”.

Yancey’s unique style and dedication of providing music and entertainment in South Dakota earned him the honor of being inducted into the South Dakota Country Music Hall of Fame in 2019.

Exposure to COVID-19 is an inherent risk in any public location where people are present. The South Dakota State Fair cannot guarantee you will not be exposed during your visit.

We will implement enhanced health and safety measures for our guests and staff members during the 2020 South Dakota State Fair.

COVID-19 is an extremely contagious disease that can lead to severe illness and death. The CDC and State of South Dakota advise those who are particularly vulnerable to COVID-19, including those over age 60 and those suffering from underlying medical conditions to evaluate their own risk in determining whether to attend the State Fair. People who show no symptoms can spread Coronavirus if they are infected, and any interaction with the general public poses an elevated risk of infection. By visiting the South Dakota State Fairgrounds, you voluntarily assume all risks related to exposure to COVID-19.